After three weeks of hectic racing in a lap of Italy, the racing has finally drawn to a close, and unless you’ve been busy trying to bleed your rim brakes for the past three weeks, you’ll have probably seen that Egan Bernal was crowned the winner of the 104th Giro d’Italia on Sunday.

And as the pink confetti settles in the wake of the first grand tour of 2021, we’re taking a look back at the tech highlights from the final few days of racing.

We’ve got Bernal taking his colour-matching game to the next level, a strange case of Nizzolo hiding his shoes despite them being sponsor correct, and we’ve even got what we believe to be a frowned-upon sponsor-swap-out from Team Bike-Exchange.

Also, while we already spotted what we assume to be a new Factor time trial bike, we’ve dug out a few extra images to compare old vs new.

Simon Yates’ Bike-Exchange team are one of many Shimano-sponsored teams in the WorldTour running the Japanese brand’s Dura-Ace wheels for most race days.

However, for the final few days of this year’s Giro, the Briton’s late GC charge was performed on an all-new blacked-out wheelset, free of any logos or branding.

Our first thoughts turned to the logo-free prototype Shimano wheels that Sunweb and Groupama-FDJ were running at last year’s Tour de France. However, these are tubeless/clincher in operation, and the carbon layup looks slightly different.

As it happens, Team Bike-Exchange are sponsored by two different wheel sponsors. Shimano cover the road stages, and Vision are contracted to supply time trial wheels.

After a bit of digging, we believe these to be new tubeless wheels from Vision. So while they’re technically not sponsor-incorrect, we don’t expect Shimano are too happy about the team bending the terms of engagement.

Giacomo Nizzolo made headlines at the start of the Giro for his custom-designed Ekoi helmet, painted with a mock COVID-19 travel document on the front, declaring his permission to travel to “win stages”.

However, at the other end of the Italian sprinter is something slightly more perplexing, his overshoes.

Throughout the three-week race, the Italian has been wearing Gaerne-branded overshoes designed to look like he’s wearing Gaerne shoes. This isn’t uncommon for Gaerne-sponsored athletes and it’s a tactic that the brand has employed at least as far back as the 2019 Tour de France, when Tim Wellens preferred Specialized S-Works 7s (Image 12).

But what’s strangest about this is that Nizzolo is actually using the Gaerne overshoes to hide shoes that are also from Gaerne.

Our main theory to this is that the shoes underneath are a prototype pair of Gaerne shoes that the brand doesn’t want to break cover just yet. We’ve reached out to the team for an explanation, but we’re yet to get a response, so for now we’re guessing.

There was another new Pinarello spotted on the final stage of the Giro. Not the Dogma F14 we spotted earlier in the week, but a Bolide time trial bike fit for a Giro d’Italia winner.

It also seems Pinarello has a surplus of metallic paint in stock, as the new Bolide is given a similarly metallic finish to both of Ganna’s recent custom bikes, but of course, in dashing pink…ish.

However, curiously, the Colombian chose not to use it. Instead, it simply paraded around the 30km course atop the roof of Bernal’s team car as a backup bike – not a bad bike to have as a backup.

In our rest day tech gallery from earlier in the race, we accused Egan Bernal’s custom pink colour-matching of not being quite up to the level of his teammate Ganna.

We have no proof, but we like to think he was reading, because in the weeks since, the Colombian has upped his game significantly.

Not only was he given that pink(ish) Pinarello Bolide, he was also seen sporting this matchy-matchy pair of Oakley Kato sunglasses.

Unfortunately, they’re not available to buy. Sad faces all around.

Time to put your nerd specs on, folks, because we’re about to take a look at the hub end caps used by Filippo Ganna during the stage 21 time trial.

On stage 1, Ganna was using the AeroCoach Aeox Titan wheels, which come with hub end caps designed in a fairing shape for extra aerodynamic performance. However as the race progressed, the UCI did what the UCI does, and went to work implementing legislation that banned this design.

As reported by our friends over at CyclingTips, AeroCoach was forced to release a UCI-legal version of the hub end caps, which Ganna went on to use on stage 21.

One of the major tech stories coming out of stage 21 was the blacked out bikes ridden by some of the Israel Start-Up Nation riders.

The team is sponsored by Factor bikes, and we’ve heard rumours of a new bike coming for a while, so we can only assume that the bike will be the British brand’s new Slick.

The differences between old and new are subtle, including a redesigned head tube area, adjusted rear seat stays and what looks to be a slightly more relaxed fork angle.

To Do These days: Get Out on the Water at Jamaica Pond | BU Right now

Thu Jun 24 , 2021
What? Jamaica Pond When? The park is open up everyday from sunrise to 11:30 pm. The boathouse is open Monday by means of Thursday, noon to 7 pm, and Friday via Sunday, 10 am to 7 pm, from Patriots Working day to Halloween. Exactly where? Jamaica Pond, Jamaica Plain, Mass. […] 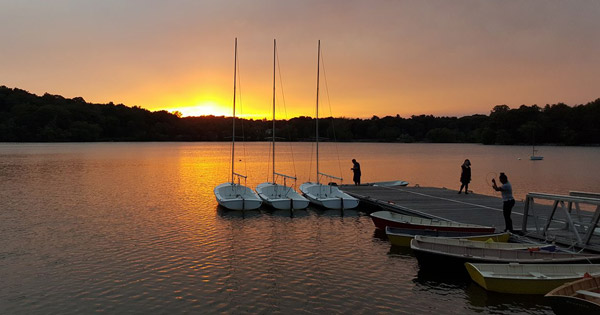